After two days of rain in Glacier and Whitefish, we looked at the weather, and decided to head west. It was looking a little better further west, and we were going to want to head that direction anyway. We had friends to see in Hood River, Portland, and Seattle. In between Whitefish and Hood River, we didn’t really have too much planned out. We thought maybe we would check out some areas of Idaho, so we headed for Sandpoint, and Coeur d’Alene. From there we could head to Spokane, Washington, and then continue west to Seattle.

From Whitefish the fastest route, is to head south down to Kalispell, and then west on US-2. We made our usual stop at Natural Grocers for refills on food, water, and ice, another stop for gas, and then got on our way.

This section of highway is very scenic, though it was busier than I thought it would be. There were also multiple sections under construction, with flaggers and pilot vehicles. One area was about 30 miles of dirt and travel speeds of around 30mph. So, what looked to be a fairly quick trip was actually quite slow. We realized we weren’t going to make it all the way to Sandpoint, and began our usual logistical fun of finding a place to camp. Bad cell service made finding campgrounds time consuming and frustrating. Those more organized than us may have already known where they’d stay, but where’s the fun in that? If we had planned it all out we wouldn’t be able to try to escape the rain.

As I drove, Shelby came up with a few campgrounds to check out along the Kootenay River. We ended up at the Yaak River Campground. It’s a nice, treed, scenic campground on the Yaak River. We hung out down at the river, made dinner, with a minimal amount of mosquitoes, and rain. We did have to prop the hood open, however, as there are some kind of rodents in the area that like to camp out in your engine compartment, and eat the wires and tubes. Fun.

It seemed like a pretty peaceful place, though, at about 8pm, a train went by. The tracks are just across the Yaak River. We were hoping this was going to be an infrequent occurrence. 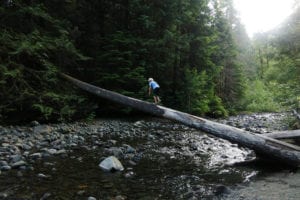 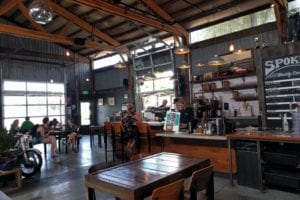 We had, at this point, decided to head back to Whitefish, Montana. 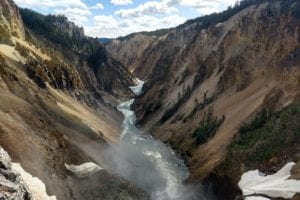 Our third day was spent exploring Yellowstone. Though we did drive through 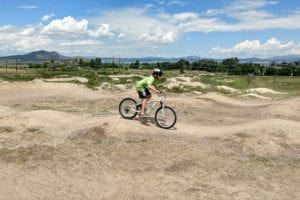