Our far too short trip to the Bay Area was over. We needed to head north. We had some things on our calendar that we wanted to be able to make in other locations. Having events on the calendar that you need to make takes some of the fun out of things, but it also helps in know when you will be somewhere, allowing for a little more planning. We prefer spontaneity, but being on the road without a plan can be stressful, as you may not be able to find a place to camp.

In our case, we managed to know where we needed to be, and when, but still didn’t plan ahead. It’s kind of the worst of both worlds. Fortunately, as we drove through the 104F heat of north-central California, we decided higher elevation was a must. Between us and our eventual destination of Hood River, was Mt. Shasta. We’d never been there, so it seemed to satisfy two desires: see something new, and find cooler temperatures.

Other than a quick stop near Redding for fuel and some phone booth entertainment, we drove straight to Mt. Shasta. Once the route begins climbing north of Redding, the scenery becomes more interesting, the driving more enjoyable.

We saw several campgrounds on the map. Unfortunately, the first one, McBride Springs, was full. As, I’ve written previously, this is one of the big stresses of van life. Camping is popular once again, and everywhere you go, there others that got there first thing in the morning. Arriving late in the day, as we usually do, since we’re on the road, means there’s a good chance most campgrounds will be full. Even the dispersed camping (aka boondocking) will often be full. Ten years ago, you could almost always find dispersed camping in the western US. Now, that’s not the case.

Our only option was to keep going, and hope to find something else. Fortunately, we found some dispersed camping that wasn’t full. It did fill up, and people kept showing up late into the night. In fact, we were woken up by someone who drove off the road into the large rocks and trees not far away. Arriving at 11pm or midnight, hoping for a camp site is a recipe for disappointment, at the least.

The forest on Mt. Shasta is beautiful, and we were super happy to have secured a decent place for the night. The downside of dispersed camping is the lack of facilities. There was no bathroom, no water, and not tables. Lately, we’ve found people tend to trash dispersed campsites. They leave trash, dog waste, human waste, diapers, built fire rings everywhere, cut down trees to burn, and otherwise treat the sites as if they will never need to be used again. It’s sad, but true.

We took an evening walk to find restrooms at another campground, and explored some “secret” mountain bike trails. Another issue of everyone enjoying the outdoors, is the idea, that you can and should just do whatever the hell you want, including building trails and jumps in an otherwise peaceful forest. None the less, we enjoyed the evening and the beautiful sunset. 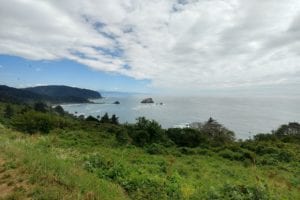 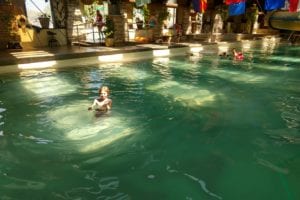 After spending the morning at Thermopolis, we made our way to Canyon 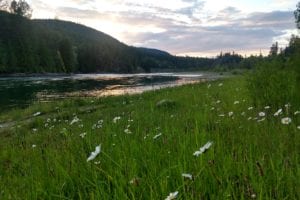